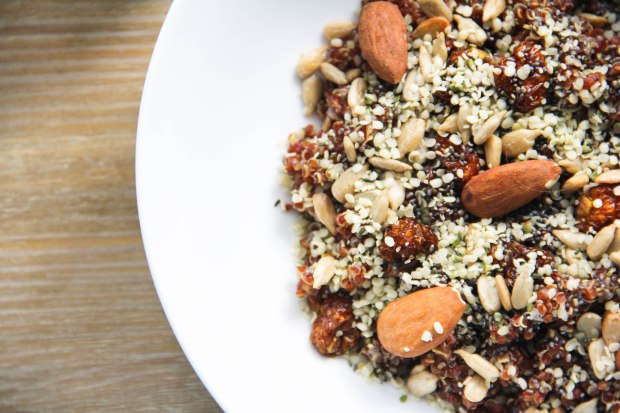 Don’t get me wrong oatmeal is awesome but it becomes a little ho hum, as Fig will tell you, if you’ve had it every day of your life for the past two years. I’ve been thinking about quinoa for quite some time and thought there might be some potential if dressed in oatmeal’s clothing; chia, inca berries, hemp, sunflower seeds, maple syrup and cinnamon.

Inca Berry, sometimes called Peruvian Ground Cherry, originates from the high altitude regions of peru. They are ridiculously expensive but equally delicious so we only buy them in very small quantities. If you can’t find any, cranberries or raisins will suffice just fine.

Fig was totally into building his own breakfast bowl since he got to put the fixings on himself. He’s really into mixing and pouring right now, so despite this being extraordinarily simple to set up, he had inordinate amounts of fun concocting his own little quinoa bowl.

Since this had the potential to create an epic mess ( think sunflower and hemp seed explosion) I let him build his bowl outside. This saves me a ton of time on cleanup and makes the process of cooking with toddlers a bit easier for all parties.

Later that day I saw a little bunny fufu hopping around the site, probably munching on some $15-a-pound Inca berries that were left in the quinoa-bowl-making wake. Eat well my little furry friend!

In a bowl combine the quinoa with all the fixings and add your milk of choice. 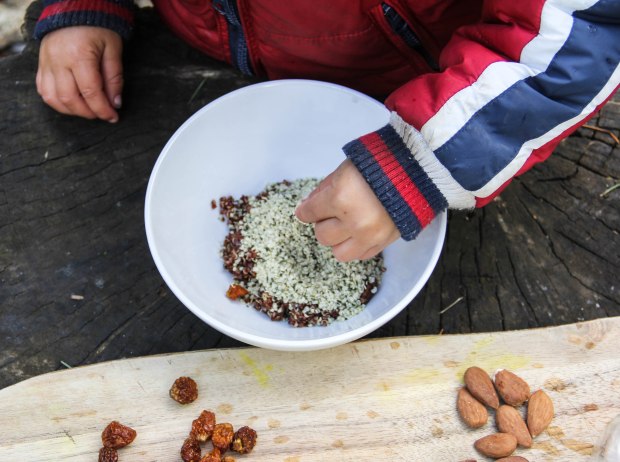 I'd love to hear from you Cancel reply